Dropped off by E Wednesday night flight out of Birmingham with a delay, a run to meet my connection (made it *just* as the door were about to close) and then arrival in DC at midnight to be picked up by J. A drive to Baltimore to spend the night with the lovely Tiger and then onward to New York in the morning!

We arrived on site Thursday night an set up our tent on a hill behind the joust company’s temporary pasture and were the recipients of a beautiful view the whole trip. Ouaquaga, NY is nestled in what appears to be the rolling foothills of lower New York state, very near the Pennsylvania line. For three glorious nights we camped beneath the cloudy, rainy skies, fell asleep to the sound of rain on the tent roof and gleeful waded through mud and wet grass to play with the fey kindred sprints of NYFF15. Our tent was part of a small three tent group housing made up of one the squires,  Dave (one of the people who makes NYFF happen) and Trinket (a fairy character on the festival circuit). We ate with the camp and the joust company, took liberal advantage of the joust company’s outdoor shower (hot water!), and just had a general blast.

I got to watch my second Benevolent Order of the Greenmen March and was pleased to be allowed to help deck out my loverly J in his traditional greenery so he and his other BOG brothers could bless the festival. Short on acorns this time around, they used a mix of pine-cones and crab-apples.

The nickel- harp is now one of my most coveted instruments.

I was able to field test the costuming for my newest festival character: Professor Marion Kitsune, a traveling apothecary fox!

We headed out Sunday evening in a rare spate of rain-free weather and took off for Alexandria, VA, where we packed up the remainder of J’s apartment at 2am and then, with the spirit of adventure filling our sails, we shrugged and continued on to Durham, NC -J’s new home- to sleep most of the day away. Awakening in the evening, we were able to spend a few hours with my twin sister (and J’s roomie) before heading down the highway to Tuscaloosa. We arrived just in time to wake up E for work and then fell into bed, the journey home complete. 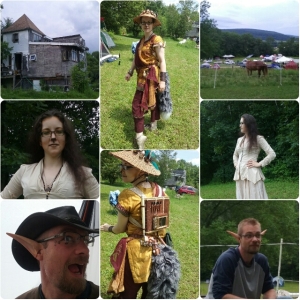